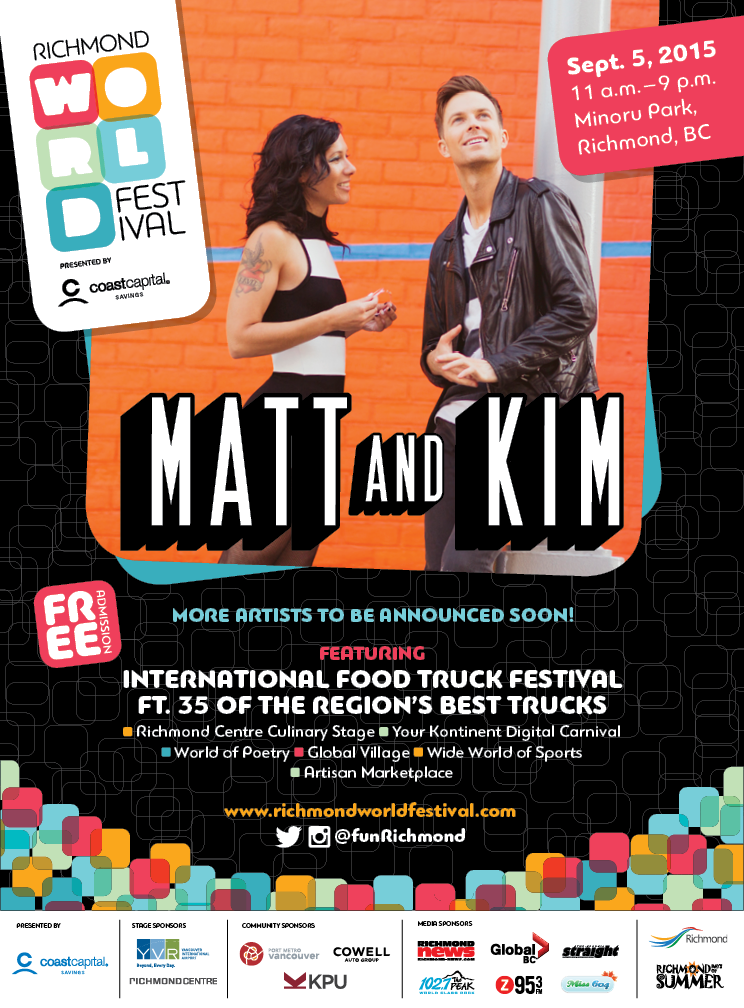 Dynamic indie dance duo Matt and Kim will headline the inaugural Richmond World Festival in Minoru Park on the Labour Day weekend. The day-long celebration of music food and culture is presented by Coast Capital Savings.

The Richmond World Festival runs from 11 a.m. to 9 p.m. on Saturday September 5 with music all day long on the YVR Main Stage, an international food truck festival with more than 35 food trucks and the Richmond Centre Culinary Stage, the Global Village with interactive cultural activities and performances, Artisan Marketplace, Wide World of Sports and more.

“We’re going to transform Minoru Park into a global village that celebrates our cultural diversity, with something to satisfy all interests, ages and tastes,” said Richmond Mayor Malcolm Brodie. “We invite everyone in Richmond and visitors from around the region and around the globe to join us for a great end of summer festival.”

In addition to its international hit headliners, the Richmond World Festival will also showcase numerous diverse cultural acts, and feature a number of Richmond based performing groups.

Main Stage sponsor Vancouver International Airport will also be bringing its T-Shirts to Paradise contest to the Richmond World Festival. Festival goers who are BC residents and 19 or older can get a free- t-shirt and enter to win a trip for two to one of six Asian destinations.

“As YVR connects British Columbia to the world, it is great to see the cultural diversity from around the world showcased right here in Richmond,” said Anne Murray, Vice President, Marketing and Communications, Vancouver Airport Authority. “We are very excited to sponsor the YVR Main Stage which will feature excellent global talent including the energetic and incredibly skilled duo Matt and Kim. We look forward to celebrating with all who join.”

💙 @SouthArmCC wants to teach you to make an origami heart! twitter.com/SouthArmCC/sta…

💙 The Richmond Art Truck is out engaging children of essential workers through art. #RichmondHasHeart twitter.com/gilmoregriffin…

💙 to all those volunteers! Thank you for showing how #RichmondHasHeart twitter.com/rcaresrgives/s…

@EpicSubset What a beautiful drawing and sentiment. Great work! 💙

We are offering a limited number of quality sponsorship opportunities to companies who want to engage with culturally diverse demographic. Each opportunity will be unique and your brand will be a stand out.